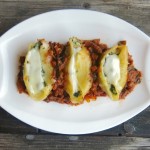 Instructions for the Filling and Shells

Cooking Pasta Shells
Cook each box of pasta shells, one at a time, following the instructions on the box
Toss the first box in a couple of tablespoons of delicious fruity extra virgin olive oil to ensure they don't stick to one another while preparing the second box, and later, while stuffing the shells

Spinach Flavour
If you don't care for spinach, use only 2 boxes of frozen spinach in the filling
Any other frozen vegetable would work well, but you would have to wring it as dry as the spinach to ensure the moisture was right out of it: then you could replace the 2 boxes of spinach with 2 cups of any other vegetable
However, it is not necessary