This soup is made from the cooked turkey carcass. 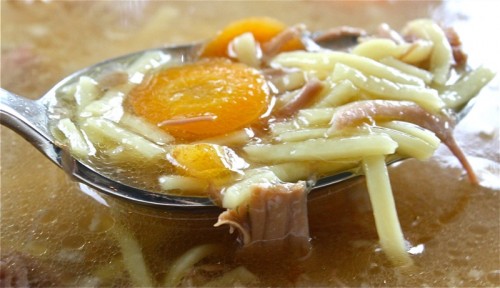 In the Eastern block, particularly in the countries that came from the former Yugoslavia, soup is a daily part of the dinner meal. Often, the noon meal, too. There is always soup first. The soup is a chicken broth soup made with homemade noodles or knedle and has very little else in it. The broth is richly flavourful as the fowl there is free range and incredible. So, when I married my wonderful husband (and it is our 8th anniversary today… October 17th), I learned to make soup completely differently that I had been making it to please him. As any good wife would! 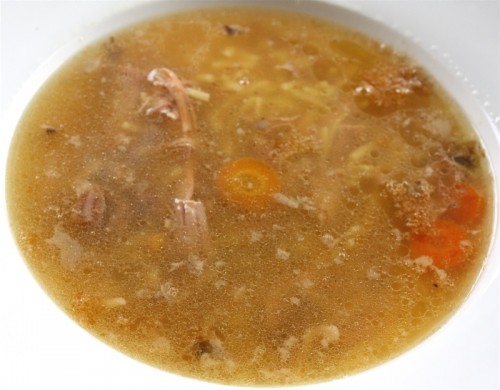 My mother’s soups, and mine, were laden with vegetables and meat. The broth was not thick, but you could definitely make a meal with a bowl of soup and a bun. That was the point. That is not the point with the soups from Vanja’s culture. They are the first course to the meal and intended to aid in digestion. I have already posted the traditional chicken soup recipe, although there it is often made by boiling an entire chicken, and then roasting it later for the main part of the meal. Or, the chicken head is often used for flavour and brings an incredibly rich flavour to the broth, much like shrimp heads bring to a shrimp bisque. There is often no meat in this traditional soup. 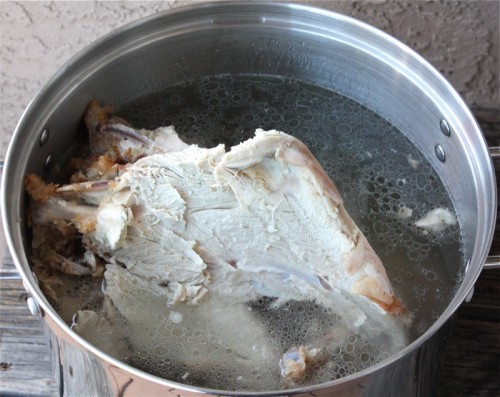 There has to be some meat in the soup. I leave the carcass with considerable meat on it, if it is a turkey soup. There is usually more than enough to eat from the carved portions, and this gives me some other ways to prepare it.Do you recognize this carcass from our Thanksgiving dinner? It goes into a very large stockpot and is covered with cold water.

I am so thrilled to still have fresh herbs in my kitchen garden at this time of year. It was such a treat to just step out the door and snip the flat leaf parsley and the bay leaves from my tree for the stock. 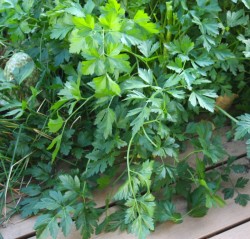 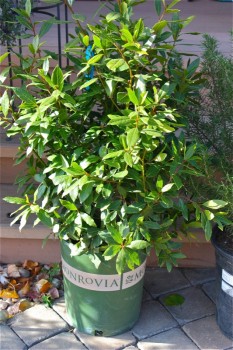 I have all of the ingredients for the stock on the plate below: onion, onion skin (it makes a dark stock: if you want a really dark stock, save all of your skins), a couple of carrots, a couple of stalks of celery (including the leaves), parsely tied in an elastic, bay leaves, and pepper corn (just a few). 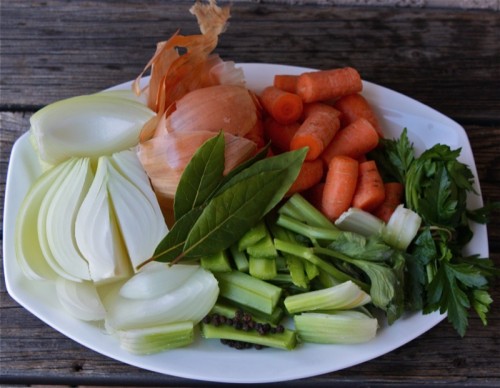 Everything goes into the pot, without salt at this point, and is brought to a boil. The surface needs skimming, and then keep the temperature to a very low boil. I keep it on the back of the stove, with the lid on it, but ajar, for 5 to 6 hours. Then, sit it outside overnight to cool.

The following day, I remove all of the bones and discard all of the vegetables. I keep the meat in two groupings: beautiful meat for eating, and hard course meat for making a turkey salad or a cold turkey pate (not baked). 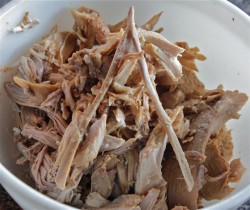 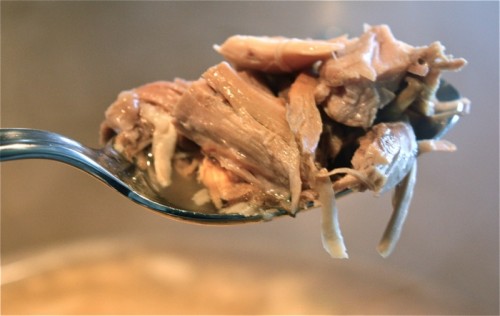 The bowl above, left, is the less desirable meat. I don’t want anything in the soup that will be unappealing in the mouth. I got just about the same amount, or more, to put back into the broth. The meat on the spoon is the succulent turkey meat added back to the soup. Below are the end of Vanja’s mother’s homemade noodles (so yellow from the yolks). I used them all at this point, with some beautiful Sundog Organic carrots sliced into coins. 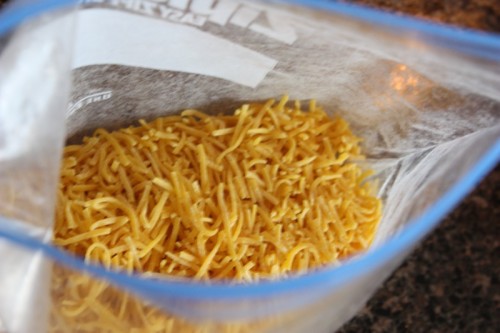 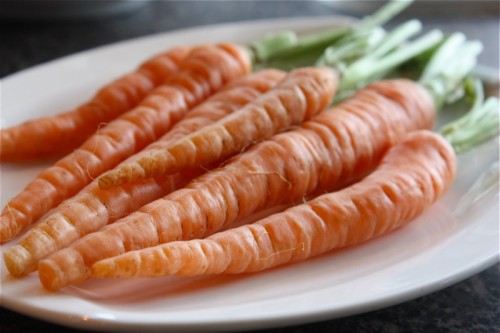 I add the meat, noodles and carrots and bring the broth or stock back to a very low boil. Sometimes I will reduce the amount to intensify the flavour if it is not flavourful enough. This was very good. I season the soup when I have the flavour and the amount I want. And that is it! Yum! 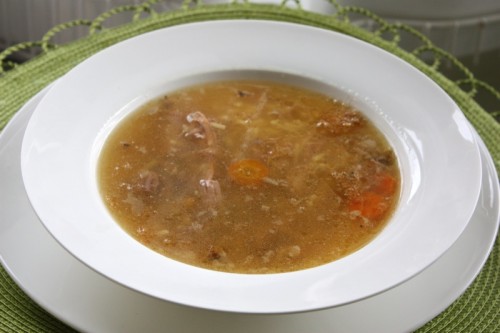 It was really difficult for me to change my soup making practices, but this soup is a lovely soup. I place the remainder in jars or zip lock bags and freeze. Sometimes, I just freeze the stock and make the soup another day. 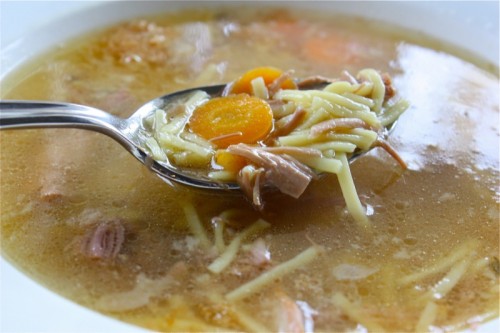 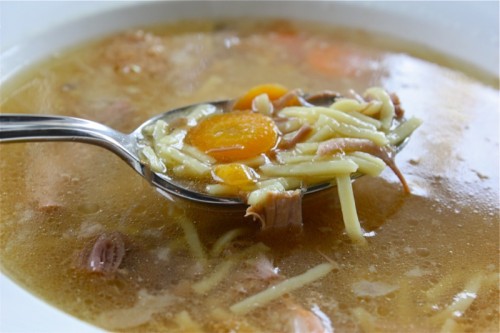 « How to Roast a Turkey
Homemade Burek, Sir Pita and Maslenica with Strudel Dough » 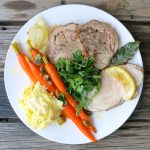 Turkey Leg Roulade with Pancetta and Sage with Larissa Prouse 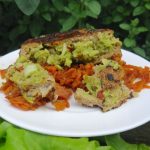 Healthy and Happy Spring and Summer with Guacamole Turkey Burgers 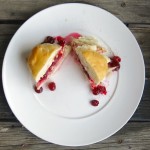 Canadian Holiday Basic: Turkey on a Bun with Cranberry Sauce 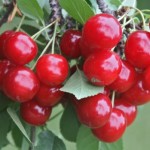 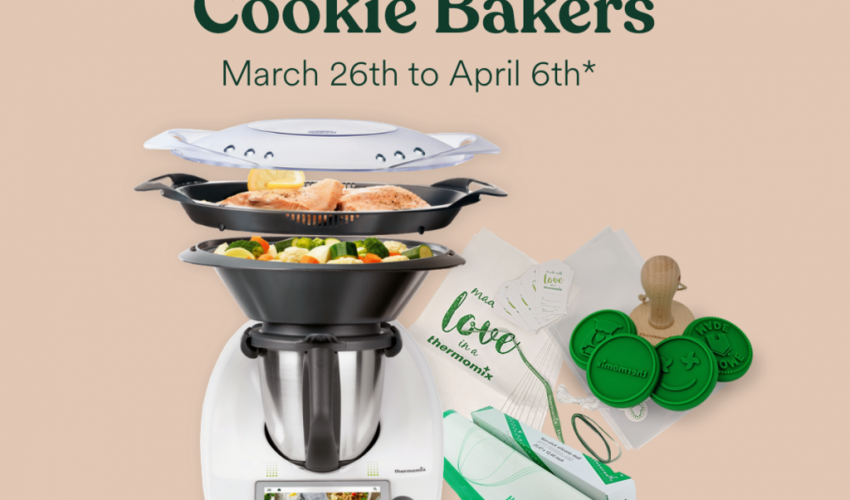 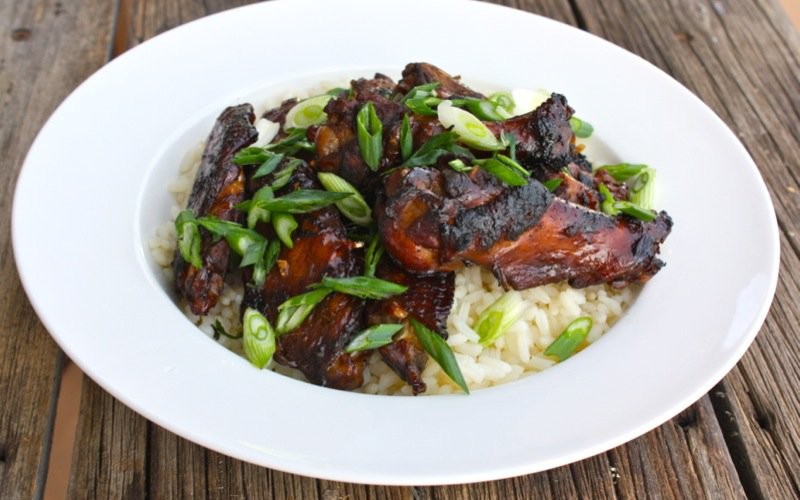 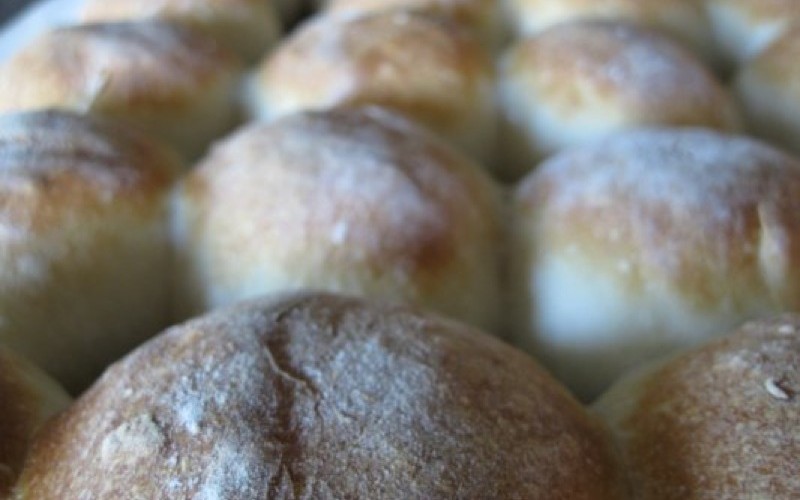